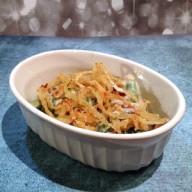 I know that many people think that cream and mushroom soup, and fried onions from a can, make a great casserole. And maybe they’re right, but it’s not the right size for a serves two feast!

I adapted this from Alton Brown and from Smitten Kitchen, to whom I am eternally grateful, because this is maybe the best serves-two vegetable dish in all creation. Really, it’s That Good. We’ll be making this again soon.

There are really three recipes in this post: one for the onions (I want to try them as a component in a sandwich!), one for the creamy mushroom sauce, and then, finally, the recipe for the casserole itself.

Crispy Onions (make lots, because they’ll be snitched all afternoon)

Toss the onions with the flour and seasonings. The idea is to coat every little onion string with some goodness. Heat 1/2″ of oil in a 10-inch skillet until a drop of water flicked into it will hiss and sputter. Add the onions – just a few at a time – so they make a single layer. Fry until they are a light golden brown, then remove to a paper-towel covered sheet pan or plate. Repeat with remaining onions. Set aside, uncovered, until needed. Be prepared to defend them against snackers.

Over medium-high heat, melt the butter in the bottom of a 10″ skillet. Add mushrooms, salt, and pepper; sauté them until they start releasing their liquid, anywhere from 3 to 5 minutes. Add the garlic, sauté briefly, just until it releases its fragrance, then add the flour, and stir it until it coats the mushrooms. Add the broth a bit at a time, stirring, and simmer it for a minute or two. Add the cream, and bring back to a simmer, cooking until the sauce thickens a bit, about 5 minutes, stirring frequently.

Bring a large saucepan of salted water to a boil, and cook the beans for about 5 minutes, until crisp-tender. Drain, then shock them in cold water to stop the cooking, and drain again. Set aside until needed.

Add the cooked green beans to the mushroom sauce, and stir until they are coated. You can bake the casserole directly in the skillet, if it has an oven-proof handle, or you can turn the beans and sauce into a lightly greased shallow baking dish. Top with the crispy onions. Bake at 400˚ for 15 minutes or so, until the sauce is bubbling and the onions are just a shade darker.

Notes on cooking ahead: the onions can be made up to a full day in advance. Hold them at room temperature, loosely wrapped (not airtight, or else they’ll get soggy.) The green beans can be cooked ahead and kept in the refrigerator until needed, as can the mushroom sauce. For that matter, the beans may be combined with the sauce and kept in the refrigerator for a day. Just top with the onions and bake right before serving, and you’ll be fine.

Get all the Good Stuff

Find a Recipe by Main Ingredient